Age, not mileage, predicted hardening of vessels in study sample 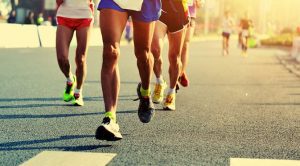 Marathoners are not at increased risk for narrowing or hardening of the arteries (atherosclerosis), a German study says.

Researchers tested the arteries of 97 runners who had competed in an average of 11 long races, such as half marathons, marathons and ultramarathons. They ran 36 miles weekly and 1,018 miles annually, on average.

There was no evidence of a link between long distance running and atherosclerosis, according to the study. The results were published June 7 in the European Journal of Preventive Cardiology.

“There has been a debate over whether intensive endurance exercise such as marathon running may be dangerous for the heart,” said lead author Dr. Axel Pressler.

“Previous studies found that after running a marathon, the same cardiac biomarkers were acutely elevated as after a heart attack,” said Pressler, head of the Prevention Center at the Technical University of Munich.

“Other research discovered increased coronary atherosclerosis in marathon runners as a potential chronic consequence of running. However, this may have been due to exposure to traditional risk factors such as current or past smoking,” Pressler said in a journal news release.

Age was the only characteristic independently associated with the health of the runners’ arteries.

Marathon running itself is not a risk factor for atherosclerosis. “It appears that you can run as many marathons as you want and not be in danger of developing impaired blood vessel function or atherosclerosis,” Pressler said.

The U.S. National Heart, Lung, and Blood Institute has more on atherosclerosis.