Is the Handshake a Thing of the Past?

Because COVID-19 has put the gesture in a different light, healthcare executives are coming up with other ways to greet people.

Our social lives are now fraught with challenges because of COVID-19 and social distancing. Even simple gestures and mores need to be navigated. The perfunctory hug — and especially the handshake — seem like relics of the past, invitations to transmission and infection rather than signals of goodwill or a deal struck.

So what will fill the void, particularly in business settings?

The elbow bump, when each person bumps the other’s elbow, may enter the mainstream as a friendly gesture, say healthcare executives. The toe tap or foot shake?Umm, maybe not in a business setting. And there’s the shaka symbol, which more people would recognize — the three middle fingers curled over with the thumb and pinky extended — than know its name. The gesture is better known as “hang loose,” “right on” or “take it easy” and was associated with Hawaii and surfer circles before people in the mainstream started to use it ironically. The knuckles facing outward to show enthusiasm are optional.

Embracing these or other symbolic greeting gestures will require a culture change, says Kevin Ronneberg, M.D., vice president and medical director of health initiatives at HealthPartners, a not-for-profit healthcare organization in Minnesota. Letting go of the handshake will be hard for many people. Ronneberg, a member of the Managed Healthcare Executive® editorial advisory board, said his grandfather instilled in him the need for a “firm handshake … where you look people in the eye.”

Peter Coelho, M.D, a physician executive at St. Louise Regional Hospital in Northern California, says he “kind of cringed” when someone tried to hug him recently. But he understands the need to hug. “There’s been a fracture. We feel that in all of our society,” says Coelho.

What follows is some advice from healthcare executives on alternatives to the handshake and strategies for building and strengthening bonds with colleagues and patients. 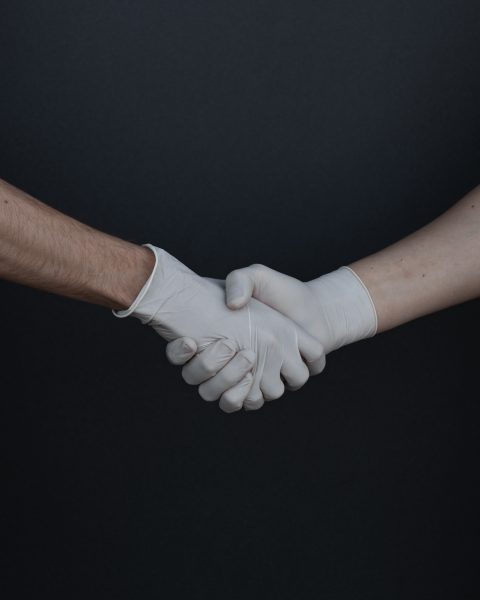 Ronneberg says it’s not about the handshake or another physical gesture. Instead, he’s focused on the message he wants to convey and on meaningful ways to connect with colleagues and patients. Unless they’re doing a physical exam, doctors aren’t touching patients these days, but they can still greet patients with joy — or express condolences— through words, says Ronneberg. Emotional intelligence helps with this, as does using words to articulate what you’re feeling and the importance of the connection you’re making. This strategy also works with colleagues, he says. For example, a colleague can feel validated when a team member acknowledges that they’re having a bad day.

Joan Budden, president and CEO at Priority Health, a nonprofit health insurance provider in Grand Rapids, Michigan, jokes that some of Priority Health’s employees are thrilled that the payer has deemed itself a “no hugging” workplace.

Budden has four more suggestions for alternatives to the handshake:

Budden is partial to the namaste, thanks to her yoga class. “It means the light in me recognizes the light in you. That ‘I hear you.’ ‘I was present,’” she says. The namaste can also be a farewell gesture that expresses trust and sincerity.

One not-minor problem with these gestures is that they are not universally understood. The senders may know what they mean, but if those on the receiving end don’t, the purpose of the greeting is undercut, especially if the two people don’t know each other. That’s why it will continue to be important to be present with colleagues and pay attention to physical interactions, says Budden.

But the lack of human touch when greeting patients and colleagues isn’t entirely comfortable for him, he says. “In my Jewish background, we’re big handshakers, huggers and kissers. It’s just part of the typical greeting, even with strangers.”

As a member of Miami Cancer Institute’s leadership team, Kalman has continued to physically go to the office during the pandemic. He and his physician-colleagues have embraced elbow bumps. His advice? “Turn your head away. There’s not as much risk (of transmitting the virus).”

Whither the side hug

Coelho knows he won’t be using the side hug — shoulder to shoulder, facing forward — to connect with colleagues or patients in healthcare settings. Coelho says the side hug is appropriate when he meets his wife’s friends because he wants to respect their space, but it doesn’t feel right at work. Kalman agrees: There’s no way to do a side hug while maintaining six-feet distance, he observes.

Budden won’t even go there. And she says that the traditional handshake now “seems kind of gross.” The handshake was safely appropriate before the COVID-19 outbreak, even though in some situations it seemed formal and too businesslike. But politicians “pressed the flesh” to connect voters, and American businesspeople shook hands as meetings started and sometimes when they ended.

Now, says Budden, she can’t stop thinking about where that other person’s hand has been.

Hipper than a handshake

The fist bump, which was popularized by pro athletes, doesn’t respect social distancing, but it is a good deal less “germy” than the handshake because the contact is brief.

A group of West Virginia University surgeons found that handshakes expose more than three times as much skin surface area as fist bumps; in addition, contact lasts 2.7 times longer with handshakes. And an infectious disease expert told The Atlantic that fist bumps can help prevent the spread of diseases such as methicillin-resistant Staphylococcus aureus, which can result in bloodstream infections, pneumonia or surgical site infections in healthcare settings, according to the CDC. He also observed that fist bumps have “the advantage of being kind of cool … Perhaps our patients will appreciate our attention not only to their health but also to hipness.”

Aine Cryts is a healthcare writer based in the Boston area.