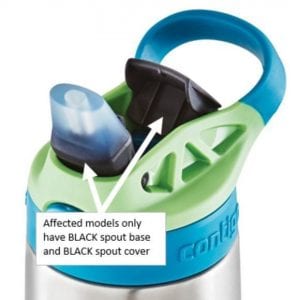 About 5.7 million children’s water bottles have been recalled after the manufacturer said the detaching spout could pose a choking hazard.

On Wednesday, Contigo said it had received 427 reports of spouts detaching, including 27 spouts found in children’s mouths, according to a notice posted by the U.S. Consumer Product Safety Commission.

When the recall was first announced in August, the company said it had received 149 reports of the spout detaching, with 18 found in children’s mouths.

The Contigo Kids Cleanable water bottles affected by the recall all have a black base on the clear silicon spout and black spout cover, according to a recall notice.

The bottles come in 13-ounce, 14-ounce and 20-ounce sizes, and four bottle colors: solid, with graphics, stainless steel and stainless steel solid colors, according to the recall notice.

The bottles were sold at Costco, Walmart, Target and through other stores and websites from April 2018 through June 2019.

On its website, Contigo said no injuries have been reported, but “out of an abundance of caution, we encourage consumers to find out if they have an affected water bottle lid and order a free replacement lid.”

Consumers may contact Contigo toll-free at 1-888-262-0622 from 8 a.m. to 5 p.m. Eastern time Monday through Friday, or go online to www.gocontigo.com/recall (or www.gocontigo.com and click on Recalls at the bottom of the page) for more information.