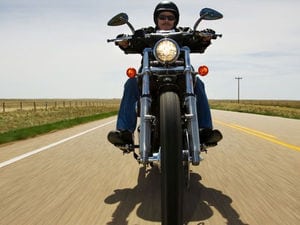 TUESDAY, March 13, 2018 (HealthDay News) — A good helmet not only protects your skull if you crash your motorcycle, it can also reduce the risk of cervical spine injuries, researchers found.

The finding counters claims by some that helmets do not protect against such injuries and may even increase the risk of injury, according to a team from the department of neurological surgery at the University of Wisconsin Hospitals and Clinics, in Madison.

For the study, Dr. Paul Page and colleagues analyzed data from more than 1,000 people injured in motorcycle crashes and treated at a level 1 trauma center in Wisconsin between 2010 and 2015. Of those patients, 30 percent were wearing helmets at the time of the crash and 70 percent were not. In Wisconsin, not all riders are required to wear a helmet.

Cervical spine injuries are among the most severe of spinal cord injuries because they are closer to the brain and affect a larger portion of the body, potentially leading to paralysis and even death, the researchers said.

The study showed that helmet use is associated with a much lower risk of cervical spine injury, particularly fractures of the cervical vertebrae, the researchers concluded.

These results provide more proof that wearing a helmet can reduce the risk of severe injury in a motorcycle crash, Page and his colleagues said.

The study was published online March 6 in the Journal of Neurosurgery: Spine.