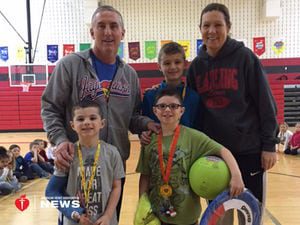 But it wasn’t from the excitement of being surrounded by 800,000 likeminded fans celebrating a world championship.

The 55-year-old elementary school physical education teacher later learned he was having a heart attack. Fortunately for Matzeder, a complete stranger who just happened to be a registered nurse saw him among the packed crowd, recognized the symptoms and took action.

While he doesn’t remember her name, Matzeder said the nurse offered him a granola bar, then escorted him to a medical tent when the snack didn’t help his condition.

Onsite medical staff told Matzeder his blood pressure was dangerously high at 165/135. When staffers found his wife Tina and the rest of the family, she knew right away that her husband was in trouble.

“I’m a certified medical technician and have worked in home health nursing for 26 years,” Tina Matzeder said. “So with his chest pain, his skin discoloration and his muscle weakness, I knew he needed immediate medical care.”

At the University of Kansas Hospital, a dye test showed two of Matzeder’s coronary arteries were almost completely blocked. A third artery was 70 percent blocked. While heart disease runs in his family — his father died of a heart attack — Matzeder said he still was shocked by the news.

The following day, doctors performed a triple bypass operation on Matzeder. The procedure was successful and he remains healthy, according to Janae Carlson, his nurse practitioner at Shawnee Mission Cardiology in Leavenworth, Kansas.

“His cholesterol is down, his blood pressure is good and he takes his meds as directed,” she said. “He’s a teacher, so he knows the value of education, and he listens to what I and his doctors tell him.”

The story could have ended there with Matzeder living a happy, healthy life, but it didn’t.

Soon after he returned to teaching at his school, one of his first-grade students, Chase Maltbie, lost his 39-year-old father to a heart attack while stationed in Korea with the U.S. Army.

Chase and Matzeder developed a strong bond over their shared loss. Matzeder encouraged Chase to help raise funds for the American Heart Association’s Jump Rope For Heart, a program the school had been involved in for many years.

“That is the most money any student of mine has ever raised in the 21 years I’ve been involved in Jump Rope For Heart,” Matzeder said.